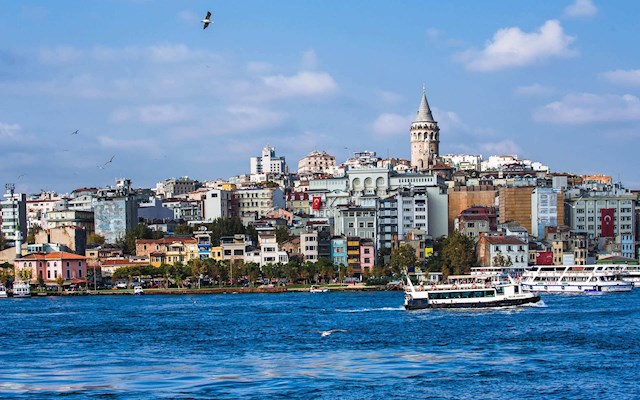 Istanbul, a fascinating city built on two Continents, divided by the Bosphorus Strait. This is one of the greatest cities in the world where you can see a modern western city combined with a traditional eastern city, it's a melting pot of many civilizations and different people. Istanbul was also announced by the European Union as the 2010 European Capital of Culture.

From the foundation of Byzantium in the 7th century BC until today, Istanbul held always an important role in the history of humanity in this part of the world. Everybody wanted to gain control of this area because of its strategic location; Empires were born here on the ashes of previous ones.

Since the Republic in 1923, Istanbul continued to grow and today it boosted its population over 14 million people living in this spread out city. This makes Istanbul the largest city of Turkey and one of the biggest cities in the world.

First inhabitants of Istanbul are dating back to second millennia BC, they were settled on the Asian side of the city. Its first name comes from Megara king Byzas who took his colonists here in the 7th century BC to establish a colony named Byzantium, the Greek name for a city on the Bosphorus. Byzas chose this spot after consulting an oracle of Delphi who told him to settle across from the "land of the blind". Indeed, Byzas believed that earlier settlers must have been "blind" for overlooking this superb location at the entrance of the Bosphorus strait, only access to the Black Sea.

In the 6th century BC Persians ruled the city and than Alexander the Great took it over after 4th century BC, which was a peaceful period until the 2nd century BC.

In 193 AD Roman emperor Septimus Severus conquered the city and it remained under the Roman rule until 4th century AD, when emperor Constantine the Great made Byzantium the capital of entire Roman Empire and gave it his name: Constantinople, and Eastern Roman Empire was called Byzantine Empire after 5th century. The city was built on seven hills, like Rome.

Early Byzantine emperors filled their city with the treasures of the ancient world, especially between 4th and 6th centuries with a population exceeded half a million. In 532 during the reign of Justinian I, riots destroyed the city. But it was rebuilt and outstanding structures such as Hagia Sophia stand as monuments to the golden age of Byzantines.

Istanbul's latter history is full intrigues and sieges, it was besieged by the Arabs in the 7th and 8th centuries and by the Barbarians in the 9th and 10th, but ruled by the Fourth Crusade between 1204-1261 who destroyed and sacked all the wealth. After this, Constantinople did not regain its former richness nor strength.

Ottomans lead by Fatih Sultan Mehmet conquered Constantinople in 1453. Renamed Islambol, the city became the capital of the Ottoman Empire. Between 15th and 16th centuries, sultans built many mosques and public buildings, topping the population again around half million by the mid 1500's, Istanbul was a major cultural, political, and commercial center. The name "Istanbul" was derived from a combination of "Islambol" ("city of Islam" in Turkish) and "eis tin Polin" ("to the City" in Greek) throughout the centuries.

Ottoman rule lasted until World War I when Istanbul was occupied by the allied troops. After years of struggle led by Ataturk against the occupying forces, the Republic of Turkey was born in 1923 and the capital was moved to Ankara province. But Istanbul has continued to expand dramatically; today its population is over 13 million and still increases constantly. It continues to be the commercial and cultural center of Turkey.

PLACES TO VISIT IN ISTANBUL

Few cities in the world spread to two continents and Istanbul is one of them. This magnificent place offers travelers a choice of places full of culture and entertainment. Places to visit in Istanbul do not stop counting. That's why we've compiled some of the main places to visit;

The Bosphorus, separating the two continents, presents the most beautiful views of the city and makes the travelers admire with its texture. One of the most enjoyable and easy ways to visit the Bosphorus is to participate in Bosphorus Tours organized from various points of the city. Ortakoy, Eminonu or Uskudar tours usually take 1-2 hours.

Topkapı Palace, which was built between 1460-1478 on an area of 700,000 square meters in Sarayburnu, was used as the administrative center of the Ottoman Empire for 4 centuries. Nested consisting of 4 palace courtyard, brought into the museum first opened to the public in the Republic of Turkey in 1924. The most interesting parts of the magnificent building, which houses a 300,000-piece collection, are the Divan-i Humayun, the Baghdad Pavilion, the Harem and the Sacred Relics.

The Hagia Sophia Museum took its current shape from the architectural point of view between 532-537 when it was built by Justinian I for the third time. Following its completion, the religious structure, which was the largest cathedral in the world for 1,000 years, was converted into a mosque immediately after the conquest of Istanbul by adding Islamic elements. In addition to its magnificent architecture, Hagia Sophia, which is the center of attention with its tombs in its garden, was turned into a museum with the works carried out between 1930-1935 in line with Atatürk's request. The majestic interior decorations, mosaics and the wish column on the ground floor are worth a visit.

The Sultanahmet Mosque, which is also known as the “Blue Mosque” because of the color of the 22,000 tiles decorating its interior, was built between 1609-1616, by the Sultan named as Ahmet I, who is known for his piety. The most important feature of the building is that this mosque is the only mosque with 6 minarets in Istanbul.

The bazaar, which dates back to the Byzantine Empire, began to be expanded during the reign of Fatih. There are thousands of shops on the streets that lie within the market place, which consists of two big bazaars called Sandal and Cevahir. The shops in these streets, which took their names from professional groups operating in the past, sell many things including delicious delights, expertly processed wood products, interesting decorations and healing herbal teas.

The Basilica Cistern, which covers an area of 9,800 square meters, was built in 532 by the Byzantine Emperor Justinian I. With the storage capacity of close to 100,000 tons, the building, which was intended to meet the water demand of the Grand Palace, became famous due to the discovery of Dutch traveler P. Gyllius. Medusa Heads located in the northwest corner and the most interesting parts of the embroidered column, which is said to represent hundreds of slaves who died during its construction The building is now host to artistic activities.

The tower was first built in 528 by the Byzantine Emperor Anastasius Oilosuz. After the catastrophes it underwent, the tower underwent radical revision processes in different periods. Since it was introduced to tourism in 1967, the 70-meter-high building, which is indispensable for travelers' Istanbul to-do lists, has a terrace with a view of the city and a restaurant serving delicious food to its guests.

Mentioned for the first time in 410 in historical sources, the Maiden’s Tower was built by Alkibiades of Athens. After the completion of the tower used for centuries to control the ship's traffic in the Bosphorus, close to the land, but isolated from the city has been the subject of many legends over time. The building, which was opened to the public after extensive renovation works between 1995-2000, now serves as a museum and restaurant. You can reach the tower by riding small boats departing from Salacak.